Alessandra Aitini was born in Mantova, where she graduated in 2010 at Conservatory “Lucio Campiani”. She obtained a Master of Arts in Music Pedagogy (2012) and a Master in Performance (2015) at Conservatorio della Svizzera Italiana (Lugano) under Mario Ancillotti. 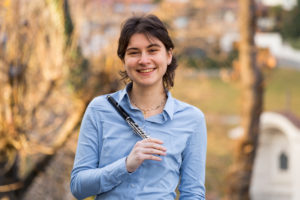 In August 2014 she was awarded the “Premio Speciale della Giuria” at the international flute competition “Gazzelloni”, prize that she won the following year as well with the piccolo quartet “Alt(r)e Frequenze” she founded. In 2017 the flute magazine “Falaut” published her recording of “Les Folies d’Espagne” by M. Marais, transcribed for piccolo and cello. She works intensely in chamber and orchestral music in Italy, Switzerland and Germany. She performed in orchestras as first, second flute and piccolo, under the following conductors: S. Brotons, A. Vedernikov, D. Iorio, M, Venzago, A. Verbitsky, A. Tamayo, T. Ceccherini, D. Rustioni.

Her musical and pedagogical interests pushed her to deepen Children Choir conducting. She teaches flute in Italy, Switzerland in public and private schools.