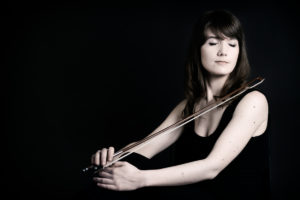 Her debut took place in the Church of Vivaldi in Venice at the age of twelve, and from that moment she started an international concertist career, collaborating with orchestras such as Orchestra di Padova e del Veneto, Orchestra d’Archi Italiana, Ensemble musikFabrik, Ensemble Modern, LSO Lozerner Sinfonieorchester in venues such as Parco della Musica in Rome, Teatro dal Verme, Auditorium “C. Pollini” and Sala dei Giganti in Padova, Teatro La Fenice in Venice, Konzerthaus in Wien, KKL in Lucerne, ZKM in Karlsruhe, Alte Oper in Frankfurt, Heeischer Rundfunk in Frankfurt, WDR and Deutschlandfunk in Cologne, Beethoven Haus in Bonn, Wigmore Hall in London.

In 2010, she won the Competition organized by Cassa di Risparmio di Padova e Rovigo, performing as a soloist with Orchestra di Padova e del Veneto. She lived one year in Frankfurt on Main where she joined the International Ensemble Modern Akademie, being awarded its scholarship.

In 2012, as the first violin of the Améi Quartet, founded with her colleagues from Internationale Ensemble Modern Akademie, she won the 2012 Kammermusikwettbewerb der Polytechnischen Gesellschaft Frankfurt and the 2013 Pergamenschikow Förderpreis in Berlin. She is often invited to take part in different European festivals.

In 2016, she made her debut in the Lucerne KKL Konzertsaal as a soloist, performing Chain 2, Dialogue for Violin and Orchestra by Witold Lutoslawki. She teaches at Accademia di Musica in Pinerolo.