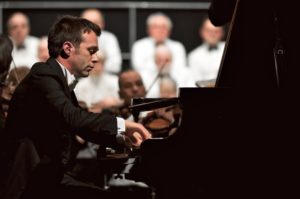 Federico Ceriani was born in Tradate in 1984, he started playing at the age of six at liceo musicale “V. Bellini” and later at musical middle school “G. Galilei” in his home town.

He was awarded prizes in national and international competitions.

A meaningful experience in his musical growth were the classes he attended with Natalia Trull at Moscow Conservatory “P. I. Tchaikovski” and with Vsevolod Dvorakin at Accademia di Musica Europea in Erba.

In 2006, he attended a specialization course at Conservatorio della Svizzera Italiana under Nora Doallo.

Federico regularly performs in musical seasons both as a soloist and in chamber music groups in Italy and abroad.

He performed at Villa Tosi in Busto Arsizio (Varese) for the Società del Quartetto, at the Theatre and University of Antalya (Turkey), he played the piano concerto K414 by Mozart and Chopin’s second piano concerto with “I Musici Estensi”, “Totentanz” by Liszt with the “Ars Cantus” orchestra of Varese. Moreover, he held solo recitals and chamber music concerts at Carducci theatre in Como, he collaborated with Associazione Dino Ciani in Milan and his concerts were live streamed on Radio Popolare.

Since the first edition, in 2006, he is part of the jury of “Città di Tradate” competition.

Since 2012, he is the Artistic Secretary of “Amusicnet” association, supporting the promotion of classical music by musical activities in Italy and abroad.

Since 2014, he coordinates the high specialization pianistic courses at “Accademia el Talento” in Desio.

He teaches the piano at liceo musicale “V. Bellini” in Tradate and “Fondazione civica scuola di musica” in Desio, he is as well part of the jury of national and international competitions.