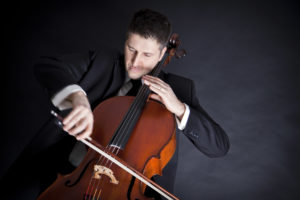 Umberto Pedraglio was born in Como in 1978 where he started playing the cello with Guido Boselli and Paolo Beschi at Conservatorio “G. Verdi”. He later attended specialization classes with Giovanni Gnocchi, Stefano Cerrato, Enrico Bronzi and Giovanni Sollima at Fondazione S. Cecilia in Portogruaro and Fondazione R. Romanini in Brescia. He graduated magna cum laude in Composition under Carlo Ballarini and Ivan Fedele at Conservatorio di Como, under Azio Corghi and Mauro Bonifacio at Accademia Musicale Chigiana in Siena and at Conservatorio di Milano under Alessandro Solbiati. He attended specialization courses under Fedele at Accademia Nazionale di Santa Cecilia in Rome, being awarded the “Hausmann & Co.-Patek Philippe” prize in 2013.

He collaborated as a soloist and principal cellist among different Italian orchestras (Orchestra Sinfonica G. Verdi di Milano, Orchestra Teatro Coccia di Novara, Camerata Ducale di Vercelli, Orchestra Antonio Vivaldi) and with well known jazzists (Chris Collins, Paolo Tomelleri, Emilio Soana, Arrigo Cappelletti), performing around Italy and Europe, and recording for several discographic labels. In 2012, he made his debut at Auditorium Parco della Musica di Roma, both as a soloist and as a composer, performing a world premiere of some of his works for cello solo and cello and piano. He held a recital at Teatro Sociale di Como, where his piece “Dialoghi”, commissioned by the Theatre for EXPO 2015, was premiered. Many of his concerts were transmitted on radio and tv (RAI1, RAI3, CNBC-SKY, RTSI. RaiRadio3, Radio Classica, Euroclassical). Pedraglio mostly performs in chamber groups, ranging from the duo to ensemble instrumentation, featuring a repertoire based on 20th century and contemporary music.

Founder of Appassionato Ensemble and of Como Contemporary Festival, a festival of contemporary music and other arts, since 2016, he is the Artistic Director of Associazione Culturale Polifonie. He is the titular teacher of Cello and Ensemble Music at Music High School “T. Ciceri” in Como. Since 2012, he has been teaching in a cello masterclass every year at Landesakademie für die Musizierende Jugend in Ochsenhausen, Baden-Württemberg, one of the most important national youth academies in Germany. Umberto plays a period cello dating back to the late 1700s by Pierre Auguste Mauchand.